My booklet – Don’t be extreme in your religion 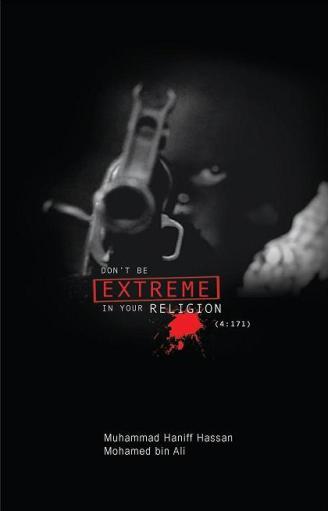 Written by me and a colleague Ustaz Mohamed bin Ali

Muhammad Haniff Bin Hassan is a Fellow. He holds a PhD and M.Sc. in Strategic Studies at the S. Rajaratnam School of International Studies (previously known as the Institute of Defence and Strategic Studies), Nanyang Technological University. He received his early education in Aljunied Islamic School. He then continued his tertiary education at the Faculty of Islamic Studies, National University of Malaysia, with honours in Syar`iah and Civil law. Mr. Haniff is also active in social activities as a member of the Islamic Religious Council Appeal Board, HSBC Insurance Islamic Advisory Board from 2000 to 2014, Association of Islamic Religious Teachers and Scholars of Singapore (PERGAS) and Management Committee of Al-Irsyad Islamic School. He writes extensively in Berita Harian (a local Malay newspaper) and has also published articles in The Straits Times. He has published six books in his name, co-authored a monograph and helped publish two books for PERGAS and the Islamic Religious Council of Singapore. His personal website in Malay is at www.haniff.sg
View all posts by Muhammad Haniff Hassan »
« My book – Muslim… Moderate… Singaporean
My booklet – Questions and Answers on Jihad »