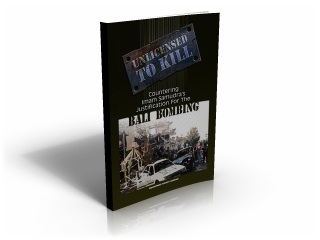 Introduction to the book:-

The book is divided into three parts. The first part provides a brief introduction to Imam Samudra and the incident of Bali bombing I. It then maps out Imam Samudra’s thinking behind Bali bombing I as written in his book Aku Melawan Teroris.

The second part points out and provides alternative viewpoints to the following issues contained in Imam Samudra’s book:
– The idea of jihad as perpetual war between Muslims and non-Muslim
– All non-Muslims are in conspiracy against Islam and Muslims
– Jihad as the means for championing the cause of Islam
– The Ruling of Jihad: Fadhu Ain and Fardhu Kifayah
– Is Bali a Place For Armed Jihad?
– Can Place of Vices Be Bombed?
– Robbery/Theft in the Name of Jihad
– Suicide or Martyrdom Operation
– Killing Civilians and Non-combatants

The third part contains statements of Muslim condemnation of Bali bombing and similar acts of terrorism for readers’ reference.

Online purchase is available at http://www.selectbooks.com.sg/getTitle.cfm?SBNum=40780

Muhammad Haniff Bin Hassan is a Fellow. He holds a PhD and M.Sc. in Strategic Studies at the S. Rajaratnam School of International Studies (previously known as the Institute of Defence and Strategic Studies), Nanyang Technological University. He received his early education in Aljunied Islamic School. He then continued his tertiary education at the Faculty of Islamic Studies, National University of Malaysia, with honours in Syar`iah and Civil law. Mr. Haniff is also active in social activities as a member of the Islamic Religious Council Appeal Board, HSBC Insurance Islamic Advisory Board from 2000 to 2014, Association of Islamic Religious Teachers and Scholars of Singapore (PERGAS) and Management Committee of Al-Irsyad Islamic School. He writes extensively in Berita Harian (a local Malay newspaper) and has also published articles in The Straits Times. He has published six books in his name, co-authored a monograph and helped publish two books for PERGAS and the Islamic Religious Council of Singapore. His personal website in Malay is at www.haniff.sg
View all posts by Muhammad Haniff Hassan »
« Just sharing – Muslims Appeal for Irish Priest Release
ICG Report – Pakistan Countering Militancy in FATA »